What does a profanity filter have to do with kawaii Japanese?

Well, coarse language is not  kawaii. Some people think the two things can go together, and if you are the kind of person who likes to put detergent powder in your cake mix I guess they can. Whether anyone sane would want to eat the cake is another matter.

If you are serious about learning Japanese, you are using Firefox. Rikaichan is absolutely indispensable. There is a Chrome version called Rikaikun, but it is very much an inferior port. This means we have no real choice of browser.

Actually I don’t have that much trouble with foul language on the Web, but then I lead a very sheltered life, even virtually. Unfortunately though, even Denshi Jisho uses it – sometimes translating neutral Japanese words (Japanese does not have curse words in the Western sense, whatever foul-language disciples try to tell you) with taboo Western ones, which, apart from anything else, is clearly just bad translation.

So for this and a few other reasons, we do need a profanity filter, and I have had difficulty finding one on Firefox. There is a strange one that does not run natively (it requires something called Greasemonkey) and is made by extreme Christians who have blacklisted just about every word that can ever be used in an indecent sense. That includes a fair bit of the English language.

Fortunately a friend introduced me to Procon Latte which incorporates a profanity filter. It is very effective and user friendly, even if you have your interface in Japanese.

Procon Latte is not just a Firefox profanity filter though, it is a family tool that blocks websites, and can be a bit painful with false positives, apparently. So unless you have children or have a problem with accidentally ending up at bad sites (I use Ghostery to block redirects), it is probably best to turn off everything but the profanity filter. 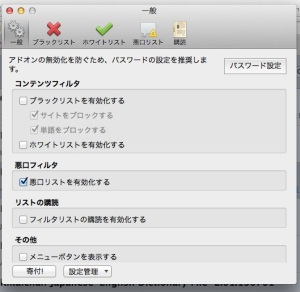 If you have your interface in Japanese (if not, why not?) and you have difficulty with the options panel, the general options pane should end up looking like the picture here (click for larger image).

Once you have it set up, it is very smooth and you can even customize what it replaces bad words with. The default is !*#@!# or something like that. I have it set to 汚い言葉.

You can edit this and the language-blacklist by clicking the fourth tab along the top (with the speech bubble – in Japanese 悪口リスト). The blacklist itself is far saner than the competition. It is perhaps a bit too short, leaving out some of the unequivocally nasty variations on a theme of foulness that get used by unequivocally nasty people.

You can edit the list yourself, or we have an expanded list which you can import if you wish.

1. First install Procon Latte itself. In Firefox go to Tools > Addons (ツール > アドオン）and search Procon Latte in the toolbar. Follow the directions to install it.

2. Download our profanity filter settings file, and unzip it.

3. Go to the very last Item at the bottom of the Procon Latte control panel (a drop-down button – you can see it on the screenshot above) select “Import settings” – in Japanese 設定をインポート – and select the file you just unzipped (it is called procon.txt).

It really is as simple as that. This will give you the settings we recommend (profanity filter only) plus the expanded blacklist which will catch more genuine foul language but does not censor everyday words. Of course if you wish you can change the settings and re-edit the blacklist yourself after you have done this to get it to your liking. Be warned: the blacklist isn’t very pleasant!

Since it is called Procon Latte we thought we should mention the cons as well as the pros (we’ll even serve some virtual latte – hai, douzo). There is really only one, other than the slightly inadequate blacklist. Like any profanity filter we know of, it cannot work in non-html environments like Twitter or Rikaichan’s pop-ups. Rikaichan actually has its own option to “Hide X-rated entries” but considering what this doesn’t hide, I’d hate to know what it does.

That isn’t really Procon Latte’s fault, and it is currently by far the best Firefox profanity filter available. 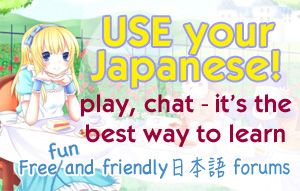